As I am writing this letter, the vast majority of Aleppo neighborhoods occupied by the rebels have been freed; the roads have been cleaned of all that prevented the communication between one part of the city and the other. While many armed rebels took advantage of the granted amnesty and surrendered, a nucleus of terrorists (especially from Al Nusra Front) refuses to surrender despite all the pleas (international and local) to evacuate Aleppo. They persist and intensify the bombing of the western neighborhoods of the city.
We are witnessing a new displacement: thousands of families are leaving the eastern neighborhoods of the city and are taking shelter in more secure areas.
Several voices are announcing that before Christmas, the whole city of Aleppo will be reunited.

We are hoping that this will culminate in the end of hostilities, the end of the nightmare, the end of the fear, and above all the installation of the peace so long awaited for since almost five years (in Aleppo).

There will be a lot left to do concerning the human aspect of the city inhabitants, how to help the people to return, to settle, to trust each other, and to accept a reconciliation? What to say to the parents of the martyrs, to the wounded, to those who have seen their houses destroyed? How to look at someone whom we suspected to be our enemy? Should we have trust in a future of peace? What guarantees to offer to the displaced and to the refugees who have left everything and have settled abroad and have built their lives there?
What answer to give to those who are suspicious, those who doubt, those who announce misfortunes?

Are we ready to start a new path? If the long-awaited peace settles among us, how to awake people to their responsibilities, to their civic and social duties?
All those and many more questions cross our mind. Maybe it is too early to answer them but we have to share them and start thinking about them.

These days, the inhabitants of west Aleppo are going to the street to go somewhere else, where it was dangerous and forbidden. Some of them are discovering the reality of what has been their store, their home or their place of worship. The war has passed by here leaving its print: everything is stolen, everything is destroyed, sometimes disfigured or even disappeared.
We take some photos, we are outraged, we cry… we try to see if there is anything to recover: a souvenir, a book, whatever was forgotten by the lords of war. The people imagined the amount of damage, but the reality often goes beyond imagination and reveals to them the atrocities of the committed crimes.

There is still a need to remove land mines. A dozen of children tried to play in a public garden. A land mine took their lives…One should avoid certain areas where there was a combat.

The western neighborhoods of the city continue to receive their daily share of rockets, mortars and missiles. Death continues to wreak havoc. Fear doesn’t cease to grow. Three weeks ago, an elementary school was hit by a missile. At least 8 students died and more than hundred people were hospitalized in the midst of a shameful silence of the great powers of this world, and a brief and timid allusion in the media.

Few days ago, Dr. Nabil invited us to be vigilant: “The disinformation continues: some media report that “Aleppo has fallen” instead of saying “liberated””.
For those who listen to the displaced people arriving from the eastern neighborhoods of the city, and those who live with them, the fact of the liberation is not enough to express the end of the nightmare they have lived. They were taken hostage by the armed groups. They were forbidden to get out, to leave. When the army arrived, they were able to feel safe. They wanted to leave as soon as possible. What to do so the media reflects the reality as it is?

As part of its monthly day “off”, the leading team of the Blue Marists went on Sunday, October 30th, to four of the poorest families we take care of. This act was followed by a time of sharing and praying. We emphasized the importance of listening and respecting every person to direct us toward the most deprived families.

On November 12th, 2016, in a special program “Ajrass El Mashrek” = “The Bells of the Levant” of Al Mayadin channel, Dr. Nabil presented “the depth and meaning of the solidarity in time of war”.

The government of Navarre (Spain) awarded us the “XIV INTERNATIONAL PRIZE OF SOLIDARITY-2016”. The Marist NGO “SED” has nominated us. In a press conference on October 30th, 2016, Miguel INDURAIN, member of the jury, had presented the reasons for this choice: “In recognition of the Blue Marists work toward peace in one of the areas the most affected by the war in Syria, the city of Aleppo, and for their defense of one of the most essential right of the human being, the right to live, and for their collaboration with other organizations”.

Fr. Georges met with high school students from 3 educational centers. He met with adults and with people interested in the situation in Syria. He explained to them the reality of the daily life in the city and presented to them all the work of the Blue Marists. Many of those who listened to him expressed their solidarity with the Syrian people.

A question was repeated several Times “where do you find the strength to continue your mission?”. And as you can imagine, our strength is rooted in our faith, our faith in Jesus Christ, close to the poor and the damned. A Jesus who invites us to encounter the other, and especially the most afflicted, the most wounded, the most bruised.

A group of kids comes to meet brother Georges, asks him lots of questions and gives him at the end a small donation…an unforgettable gesture…a gesture of solidarity…a gesture that goes well beyond all borders.

The president of the government of Navarre and the director of Laboral Kutxua, encouraged the Blue Marists to continue their work. Brother Georges, in his thank you word, announced that this award is an honor to the blue Marists, but we dedicate it also to all of the war victims…The award comes at the moment when the city of Aleppo is suffering. This international solidarity stimulates us to resist and to continue our mission. Our thank you is a promise: “To stay, to continue, to be very close to the people who suffer”.

In a visit to Germany, brother Georges had the opportunity to meet with friends who listened in person to a direct witness of the situation in Aleppo. They discovered a different reality from what the western media are reporting and appreciated our solidarity with more than 1000 families.

For that, we benefit from a large network of friends who support us and pray for us. I would like to take the opportunity to thank them and tell them how much we appreciate their support and prayers.

At the end of November, we offered every person we support (and they are thousands) a pair of shoes and a set of new clothes.

These days, the chaotic situation of the bombings forced us to take, as a safety measure, the decision to temporarily stop our two projects: “Learning to Grow” and “I want to Learn”.

One day in November, following a missile that fell very close to the distribution center of our program “Drop of Milk”, the windows were all shattered. Fortunately, it was only material damage.

The water distribution teams are not stopping. In the middle of winter, despite the liberation of the water pumping station inside the neighborhoods freed by the Syrian army, the water remains unavailable as well as the power.

The training program of 100-hour “How to Develop a Small Project”, in which 20 people participated has been completed. The participants drafted their projects, and it will be up to the MIT jury to evaluate the best ones and choose two that will be financially supported by the Blue Marists. 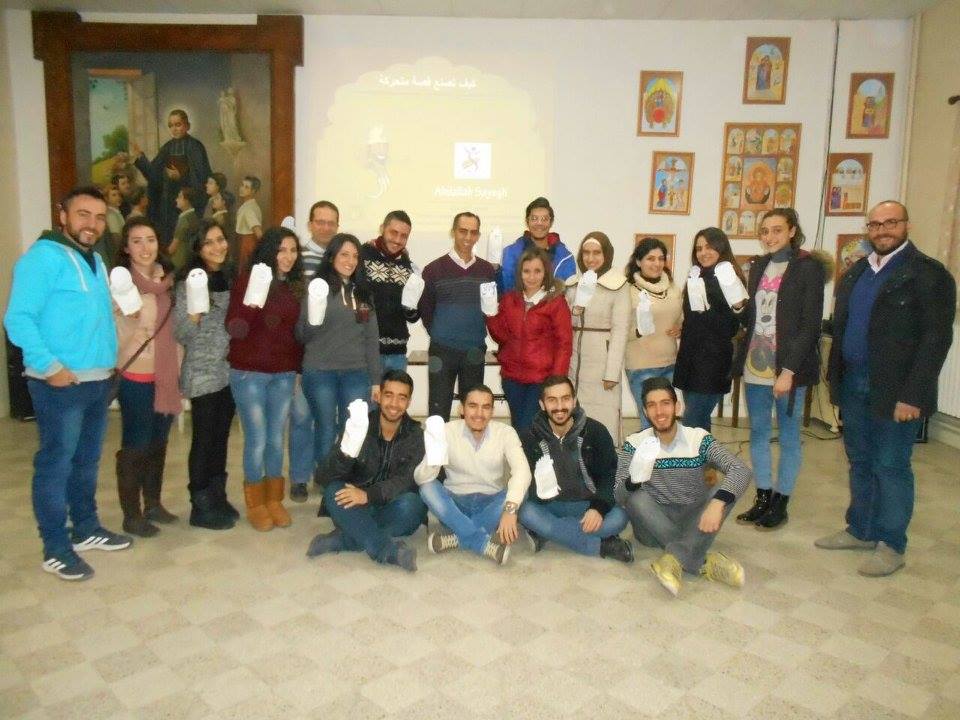 We added a new developmental program to our list. It is “Cut and Sew”. Designed for women, the program was launched in November 2016, 24 women are participating in it. During 4 months, they will train in cutting and sewing for 6 hours weekly.