The testimony of Muslims of the martyrdom of Christians

The event began with a conference offered by the Archbishop Emeritus of Algiers, Archbishop Henri Teissier, titled ‘The testimony of Muslims of the martyrdom of Christians in Algeria (1994-1996).’ The context of the conference could not be more significant. The encounter took place in L’Antiquaille, a cultural place very near the Basilica of Fourvière, which recalls the history of the first martyrs of Lyon. L’Antiquaille is a Lyonnais “high place” of “memory and history” where one can discover the main stages of Christian history in Lyon and its development throughout the centuries.

In the undergrounds, one can find the place where Saint Pothinus was jailed. He was the bishop of the first Christian community known as Galia, based in Lyon. Pothinus was arrested in 177 under the mandate of Marcus Aurelius at the same time as Blandine and 48 Christians, who testified to their faith. They are Lyon’s first martyrs. 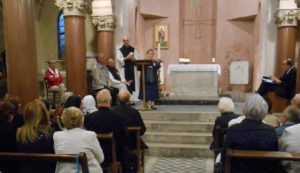 In this place, one listened to the echoes of the voices of Muslim witnesses, who emphasized the faith and the personality of the martyrs of Algeria. Archbishop Henri began by quoting the words of a former student of Brother Henri Vergès, of the school of Sour el Ghoziane, where Br Henri taught mathematics.

“All humanity is proud of the existence of such people and saddened by their loss,” he stated.

“We would like to express our friendship; our fraternity amidst this drama that affects us all,” he stressed, regarding another message of Algiers that also referred to the life of Br Henri. “Never forget that you are our brothers. Whatever the differences of our dogmas, we think we have the same God. You are in our home and we love you.”

Then the speaker continued highlighting various testimonies of the 19 religious killed in Algeria between 1994 and 1996. Of particular significance was that of a law student that met four White Fathers of Tizi Ouzou.

Most of these testimonies are collected in a book written by Teissier and published under the title Chrétiens en Algérie, (Desclée de Brouwer, 2002). The ceremony ended with the unveiling of
a plaque in memory of Brother Luc, a monk of Tibhirine, placed in the reception of L’Anticuaille.

Encounter with Father Thomas Georgeon, postulator of the cause

On Saturday, Sept. 17, a private encounter was held between the families of the martyrs of Argelia and Father Thomas Georgeon, postulator of the beatification cause of Bishop Pierre Claverie and his companions. The cause that includes the process of 19 religious that died in Argelia between 1994 and 1996, which includes our Brother Henri Vergès, is known with this name.

Bishop Pierre Claverie, of the religious order of the Dominicans and Algerian by birth, but with French nationality, was the bishop of the diocese of Oran from 25 May 1981 until his assassination. The notorious murder of the monks of Tibhirine occurred on 26 May 1996. Pierre Claverie knew his life was also in danger and yet he continued in Argelia. On 1 August 1996, a bomb exploded at the bishopric’s entrance taking the lives of Pierre and his young driver and Muslim friend, Mohamed, shortly before midnight.

The encounter of the postulator with the families was set in the crypt of the church of Saint Irenaeus, next to the seminar that holds the same name.

The words of the mother of the young Mohamed, who was killed alongside Bishop Pierre, were particularly significant and meaningful. The archbishopric provided a meal to the families of the
martyrs present at the event at 12:30 p.m. As representatives of the family of Brother Henri Vergès, there was a group of 15 people, led by Superior General Brother Emili Turú, the Provincial Superior of L’Hermitage, Brother Pere Ferré, and Br. Antonio Martínez Estaún, procurator general.

Encounter with Muslims and Christians 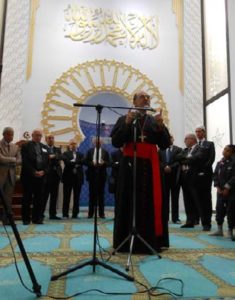 In the afternoon, from 2:30 pm onwards, the group went to the Great Mosque of Lyon, surrounded by special security measures and led by its rector, Kamel Kabtane, where Christians and Muslims prayed for unity among all men and all peoples, and in memory of the victims of the violence of terrorism.

A heartfelt prayer proclaimed with emphasis by one of the imams made the following request to the Lord on behalf of all those present: “Grant your love, your mercy and clemency to all who have been victims of hatred or blind violence of terrorism, those men and women who have paid with their lives, their love and their commitment to their Muslim or Christian faith.” He concluded with his prayer with this petition: “Oh Lord, bless France and the French and make our country a safe haven. Pour out upon them your peace. Grants its inhabitants your mercy, your favour and your clemency, You who are the Master of the world, the Almighty, the Merciful.”

At the feet of our Lady of Fourvière

At the 5:30 p.m., a Mass in Fourvière was celebrated due to the visit of the bishops of the Algerian diocese to Lyon to honour the martyrs of Algeria and promote the cause of beatification. Four Marist brothers led the procession with which the liturgy began.They held candlesticks lighting 19 luminaries to recall the living faith of the 19 martyrs of Algiers that make up the cause of beatification, which is includes Brother Vergès. These candles were placed at the altar where they remained throughout the entire Mass as a sign of the living presence of those who gave their lives for the faith. And also as living testimony to the Spirit that had animated the meeting.

During the homily, given by Bishop Paul Jacques Marie Desfarges, S.J. – Bishop of Constantine (-Hippone) and Apostolic Administrator of Alger – the figure of Brother Henry Vergès was emphasised as well as his testimony of faith among the residents of Algiers. Several Marist Brothers from different communities near Lyon accompanied Superior General Brother Emili Turú and the new Postulator General, Brother Antonio M. Estaún, during these events.

Already nightfall in Lyon, the meeting ended outdoors, in the area of the seminar, while the waters of the Saone and the Rhone were multiplied with the gentle rain. Cardinal Philippe Barbarin, Archbishop of Lyon, had extended an invitation to participate in an Islamo-Christian friendly meal with this name: “Le lien de la Paix, Ribaâr essalam”.
_____________
Br Antonio M. Estaún