Seventy-five Marists, laity and Brothers who were representing all of the Institute’s regions, met in L’Hermitage on Oct. 4 – 14 to discuss the formation process of Brothers. The Brother superior general, his full Council and the directors of the secretariats participated. The secretariat Brothers Today organised the Colloquium.

In today’s news bulletin, we would like to share two texts published in Champagnat.org and the daily chronicles written by Brother Dan O’Riordan, of the United States. The complete list of participants, photos and other details are available at http://www.champagnat.org/000.php?p=379.

Over 75 Brothers and Lay Marist from more than 40 countries and all 6 regions of the Institute are gathering these days at L’Hermitage for the first ever Marist International Colloquium on Initial Formation. The day began with a welcome from Br Xavier Barcelo and the community of L’Hermitage. Community members Allan De Castro and Martha Martinez gave tours of Champagnat’s house to those who had never visited L’Hermitage prior to the Colloquium. A morning coffee break followed the tours of the house. The Group then gathered in the Conference room for the opening of the Colloquium with welcoming remarks from Bro. Tony Leon and Bro. Emili Turú. 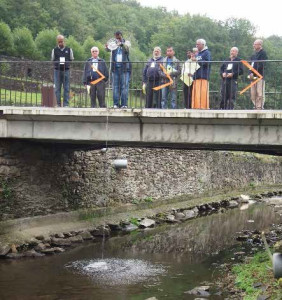 Prior to Lunch, everyone participated in a beautiful and moving prayer that focused on the theme of running and living water. All participants were asked to bring small amounts of water from their home countries. During the prayer, all participants were invited to pour their water into bowls separated into the six regions of the Institute. Members of each region then walked to the bridge that crosses over the Gier and symbolically emptied their water from the collected Regions into the Gier.

The topic of Initial Formation began to be addressed in discussion groups by language for the remainder of the first afternoon.

Brother Peter Rodney and Brother Ernesto Sanchez introduced the participants to a series of synthesis documents of a recent Institute wide survey. Each participant spent personal time reading and analysing the documents. The documents were then discussed in language groups prior to lunch.

The afternoon session began with a Marial prayer offered by Brother Chris Wills. 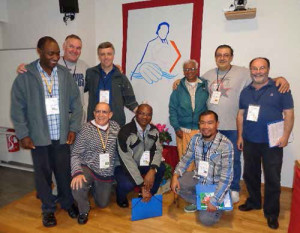 Participants were then divided into groups according to region in order to identify strengths, weaknesses and opportunities within their respective regions in regards to initial formation.

Brother Tony Leon concluding the afternoon session by having the participants engaging in a unique way of sharing belief statements around the topic of initial formation.

Following supper, participants from the regions of Africa and Europe offered a cultural night of festivities with music and dance.

The day began with Morning Prayer offered in subgroups in the different chapels of Hermitage celebrating the feast day of Our Lady of the Rosary. 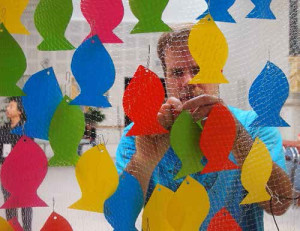 Fr Michael McGuire was today’s Keynote speaker on the topic “The Reality of the World of Young People Today in Initial Formation.”

The afternoon session began with a Marial prayer offered by Brother Eugene Kabanguka.

Participants attended two workshops during the afternoon. They selected from the following five workshop options:

The day concluded with Liturgy and supper.

Brother Joe McKee was today’s Keynote speaker on the topic of “Marcellin as the formator.” 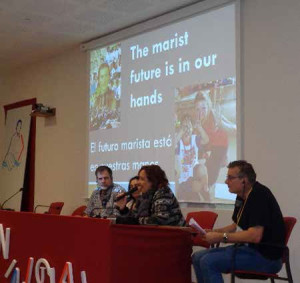 The second morning session was an opportunity for participants to hear witness from three current formators; Brother Jose Miguel Cabellero from our Columbian Novitiate, Brother Lawrence Ndawala from MIC and Brother Nicholas Fernando from our Asian Novitiate.

Participants attended a workshop during the afternoon. They selected from the same five workshop options that were offered yesterday:

The day concluded with a formal Thank you of the workshop presenters, Liturgy and supper.

The day was introduced as being a day all would celebrate an extended Eucharist. It began with the Liturgy of the Word offered by Brother Joarês Pinheiro, Brother Angel Bermudez Medina and Brother Alfredo Herrera. The Word continued to be broken open through numerous conversations and personal time throughout the morning.

Brother Emili Turú was today’s keynote speaker on the topic of “Formation for a New Beginning”.

The second morning session offered an opportunity for participants to listen to four of our young Brothers and their recent experiences in Initial Formation. The brothers were: Brother Nelson Beltran from the Philippines, Brother Leandro Cimadon from Brazil, Brother Sefe Une from Samoa and Brother Stefano Divina from Italy.

After Lunch, all participants boarded buses for a trip to the Cradle of our Institute in La Valla. After tours of the house, the Liturgy of the Eucharist was celebrated in our First Marist Home. Participants then traced Champagnat’s steps in walking from La Valla to Hermitage.

The day began with our lay Marists leading the Morning Prayer and then sharing their wisdom of what needs to be included in initial formation from the perspective of the Laity. Brother Tony Leon led the group through a process of sharing convictions and concerns in regards to initial formation.

Brother Ernesto Sanchez presented a summary of these Core Values.

Participants had four options of how to spend their free day. Some chose to travel to Taizè for Eucharist, others made a pilgrimage to Fourvière in Lyon, others reflected on Champagnat’s life by hiking from Rosey back to L’Hermitage and the last group simply enjoyed the peace and quiet of L’Hermitage. 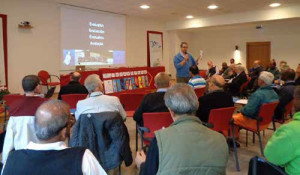 The day began with Morning Prayer and then Brother Hipólito Pérez Gómez introducing the tasks that each of the seven work groups would concentrate on until lunchtime. The groups worked with the synthesis of Saturday’s results and each made three specific convictions, orientations and recommendations around the seven topics of formation (processes and structures), joint Brother and lay formation, internationality/global availability, communities, vocation ministry, formators, and Brothers for a New Beginning.

Brother Juan Carlos Fuertes divided the participants into another set of work groups to analyse the collated results from the morning sessions in preparation for Tuesday final day of work.
After the day’s liturgy and supper, a festive and rich cultural night was offered from the Asia and Oceania regions.

Tony Leon then introduced the morning work task that had the participants produce the Final version of the Presentation to be presented to the General Council.

The afternoon session began with a Marial Prayer offered by Zuni Silva Arguello.

Participants met next in their Regional groups to produce three practical ways they could implement some of the topics discussed during the past days.

Prior to supper, a beautiful prayer service allowed each Region of the Institute to share their implementation plans.

After supper, the final Cultural Evening was offered by the Americas.

The Final day of the Colloquium began with Morning Prayer offered by Brother Tony Leon that included a review through pictures of the entire experience.

Bro. Emili Turu gave an inspiring closing address. The Three words that were the focus of his talk were:

Flowing because of how the water of the Gier flows through each of us now and how we must at times be willing to flow upstream as a way to swim against the current or be Counter Cultural in today’s world.

Magic was his final word. He used it in the context of a video we watched about a Flash Mob performance in a mall in Italy. He was actually present at the mall the day it happened. He shared how the creators of this experience produced incredible Magic for all gathered that day in just six minutes. He asked us to imagine the Magic we as Marist could similarly create in our lifetimes.

The Colloquium concluded with a beautiful mass. On the first day, participants brought water from each of their home countries and poured it into Regional bowls that were then symbolically poured into the Gier. Each participant received a small bottle of water filled from the Gier as a final parting gift.