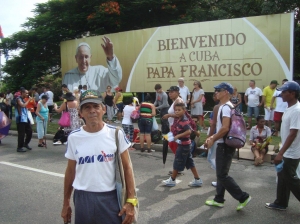 Pope Francis visited Cuba from the 19th to the 22nd of September, before travelling to the United States. The Marists of the community of Cienfuegos share with us their impressions on the presence of the Pontiff in the country.

Following are some impressions which do not intend to be a highly praised analysis of this visit, but a quick sharing of something we have reflected upon and especially experienced during these days.

These have been four days preceded by four months, that like Cuban Church and as Marist community we have lived intensely the “hurricane Francis”, days of joy, of hope, of listening, of some fear and concerns, and also of much movement and hard work.  Mass media has covered the all the preparation before the visit, and during the visit, something absolutely unusual in the Island.  Hopefully these will be days that will be transformed into graces and an appeal to renew ourselves in our religious and missionary commitments.

Here are some brief impressions.

On his arrival to the airport of Habana, the Pope emphasized the “apostolic” character of his visit.  At the end he added some delicate insinuations with implications of a social slant: “…that the Church continues accompanying and encouraging the Cuban people in its hopes and concerns with freedom and with the necessary means and spaces to take the announcement of the Kingdom”. And at the end: “I will have the occasion to go to El Cobre, as a son and a pilgrim, to ask our Mother for all her Cuban children and for this dear Nation, so that it will follow the paths of justice, peace, liberty and reconciliation”.

The Eucharist, both in Habana as in Holguín, as compared with previous celebrations, gained in it Caribbean taste:  in active participation of the communities, in the spirit of prayer and of listening, in enculturation.  It seemed to us that both Masses significantly brought together less people than the previous visits, and this made us happy, because these were not “blown up” assemblies but rather more real in the Cuban Church, which is a minority Church. In Habana the words of the Pope invited us, not “to use others to serve us but to serve, to take care of the fragility or weakness of our neighbor”. In the homily at Holguín he commented the conversion of Matthew as a “play of looks” in which it is always “Jesus the one who looks first” and he insisted in “allowing his look to give us back happiness, hope and the joy of life”. The silence with which the Pope was followed in the respective homilies really made the “hair stand up on end”.

The encounter with the young people was emotional, the words of the boy who spoke to the Pope were frank, realistic, direct; in his response Francis left aside the discourse that he had prepared for the occasion and improvised a message in which he invited those present to dream, to tell our dreams, to be a land of encounter, to dialogue, to promote social friendship, not to close ourselves up in “little convents”, but to live and let hope be contagious.

The moment when we saw the Pope more touched was in the meeting with the religious Sisters, Seminarians, priests and religious men in the Cathedral of Habana.  Here also he left aside the message that he had prepared and he encouraged us to be a Church that is poor, ready to carry on our mission in the midst of limitations and restrictions, privileging attitudes of mercy and having the preference for the last ones.

The Encounter with the animators of the Mission Houses in El Cobre had a stressed Marian character.  Inside the Shrine we gathered together approximately 1000 persons and outside perhaps twice the number, simple persons who came from the neighborhoods, the suburbs and outbuildings of the sugar refineries from all the Dioceses of Cuba.  Fervor became present through the enthusiasm of the Cuban rhythms that thundered in a full Basilica.  The Pope encouraged us “to go out of the house”, just like Mary in the visitation and to contribute to the “revolution of tenderness”.

Francis is a Pope who speaks with words and gestures. Through his open smile and his closeness to the people, his embraces and caresses to the children, the disabled persons, elderly persons, he encouraged us to become present in the existential peripheries taking joy and consolation. He is especially loved in Cuba because besides having a charismatic personality that attracts, he is contributing to the diplomatic thaw in the relationships with the Government of the United States and in helping both peoples to get closer to one another. Almost all his interventions ended with the humble “and do not forget to pray for me, or at least to wish me good things”.