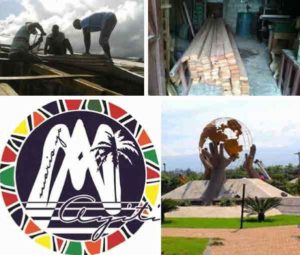 A month after hurricane Matthew hit the southwestern part of the island of Haiti, the situation of thousands of displaced people remains critical. External humanitarian aid is insufficient and, when it arrives, it is slow and spaced out in time, due to the challenges in its distribution, as well as to the state of the roads.

Today the island is experiencing the worst humanitarian crisis since the earthquake of 2010, in which an estimated 50,000 children lost their homes and now live in temporary shelters. It is also estimated that approximately 100,000 children have not been able to return to school.

The Marist world in Haiti

Marist Brothers who reside in the island have been working tirelessly to serve and help our communities. In a first moment, it was difficult to assess the damage due to the difficulty of communication with the communities of Jéremie, Latibolière, Dame-Marie and Les Cayes, whose inhabitants have lost everything. Later, they realised that the three Marist schools on the island had been severely damaged, with fallen ceilings, broken windows, ruined walls, destroyed solar panels and broken or missing water tanks. In addition, many houses of the affected populations, including those of the same brothers and their families, had damages that varied between small and very severe. In the most serious cases, some houses were completely destroyed and others are still uninhabitable, due to damage to the foundations, walls, ceilings and water tanks.

Status of the “Solidarity for Haiti” Campaign – Mexico Occidental

It will be one month this week since the “Solidarity for Haiti” campaign began. Support of the Marist schools of the Mexico Occidental province has been requested by means of the campaign in order to join their communities to this work of solidarity with the Haitian people.

In this context, we have already managed to send some aid to our brothers, with the aim of beginning the most urgent work. We are very proud to communicate that the campaign has had an echo both nationally and internationally, with the participation of the schools of our sister province, Mexico Central, as well as Fundación Marista Solidaridad, Educación, Desarrollo (SED) and Marist International Solidarity Foundation Onlus for the benefit of children (FMSI) who are also supporting us with rebuilding schools in Dame-Marie and Latibolière.

However, to date we have raised just 15% of the budget needed to fix the Marist works in Haiti and ensure that our children can continue to study.

Reconstruction work on the island

Wood, nails and metal sheets have been purchased to date through the money that has been raised so far in order to begin the reconstruction of the schools in Dame-Marie and Latibolière, and the necessary local labour has been recruited. (Bulletin presented by Solidaridad Marista AC – México Occidental Province – 9 November)