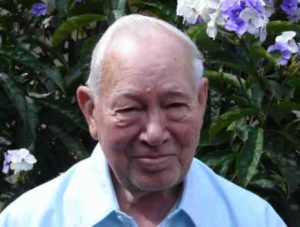 On the 19th of this month, Br Alberto Castrillo Tablado, of the Province of Central America, celebrates 100 years of life. The community of the Provincial house in Guatemala and the whole Institute celebrates this centenary of a life dedicated to the ideals of Fr Champagnat.

Br Alberto was born in Palacios de la Sierra, Burgos, Spain. His first appointment was to Cuba. He has spent most of his life in El Salvador, especially in the city of Santa Ana.

Those who know him well describe him as a simple brother, warm and with a big heart, very much aware of what is happening around him, a man of a deep spirituality, much appreciated by his ex-students.

Br Emili, in the letter he sent to express his good wishes, told Br Alberto that “your fidelity to your vocation is, at the same time, a wonderful sign of the FIDELITY of the Lord to you and to each one of us”.