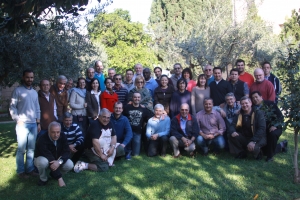 The Institute’s general house in Rome offered Brother Pietro Bettin a farewell ceremony on Dec. 2, before his departure to Genoa, where he will serve as superior.

The Institute’s superior general, Brother Emili Turú,addressed participants during the Eucharistic celebration held at the Champagnat hall at noon.

“I will say three words, all with ‘s’, that we can apply to describe Pietro,” he stated. “The first ‘s’ is serenity, have you ever seen Pietro angry?”

“I’ve seen that in these six years, Pietro has lived with a great serenity and this has clearly helped the community a lot because serenity is contagious,” added Br Emili.

He stated that the second word that describes Br Pietro is the word ‘service.’

“And the third is ‘simplicity,” the superior general continued. “As Marists, we want to be inspired by Mary, a person who has probably lived very well these three ‘s’ words and she was a very simple person as was probably Marcellin Champagnat.”

According to Br Emili, being simple helps a community with an international environment have peace and serenity.

After the Mass, Br Pietro offered a rose as a symbol of gratitude for his time as the superior of the general house community.

“The first word that comes to my mind is ‘thank you’ – above all, thank you, Lord, and thank you, my superiors, who have given me the possibility to undertake this experience and thank you, Emili, for the things you have said,” he remarked.

“Collaboration has helped me a lot and I’ve never lacked it,” he added. “I asked myself this morning how many brothers have passed by the general house in these six years – not in the general house because that would be hundreds but in the community – and I counted 65 Brothers of which 39 have returned to their provinces and two are in paradise.”

Br Pietro went on to thank the lay staff, who were also present, stressing that there is a “good spirit among them” and asked for everyone’s prayers.