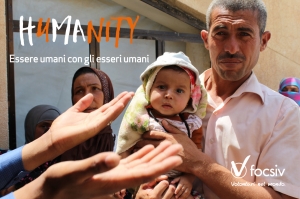 FMSI continues to support the Blue Marists in Aleppo and the Fratelli Project, an educational programme for refugee children and youth in Lebanon. Its support also continues, thanks to FOCSIV (Federazione degli Organismi Cristiani Servizio Internazionale Volontario) and to its campaign HUMANITY – Essere umani con gli esseri umani.  (HUMANITY – To be human with human beings)

FOCSIV, together with six associates including FMSI, united in a consortium, supports thousands of persons fleeing from the war in Syria, Iraq, Lebanon, Jordan and Turkey; it places itself at the side of the people who are trapped in some besieged Syrian city; it receives and accepts in the Refugee Camps of Kurdistan, in Iraq far away from the areas controlled by the Caliphate and by ISIS; it is concerned and takes care of education and of professional  formation, of agricultural development, of health and psychological well-being, of disability and of the needs of so many men and women of the Middle East overwhelmed by these tragic years.      .

All the work is directed to, in behalf of the more vulnerable, the women and the children, with particular attention towards projects which have as objective the reconstruction of a sustainable future, in the first place, for the persons, and for their own Country of origin or of adoption, afterwards.

A joint and shared commitment with the conviction that only peace negotiations remain the absolute priority, that the parts are called to commit themselves to guarantee the access to humanitarian help and that the Governments have to put an end to the hypocrisy of the financing of arms.