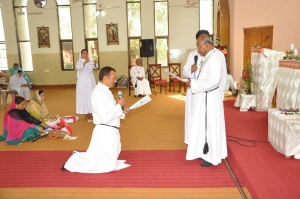 Let the little children come to me was the main theme of the Final Profession of Br. Bininamine Masih, commonly known and called as Br. Ben, in Pakistan – Peshawar City, last 11th October. He hails from Sargodha City and St. Francis Xavier Parish of the Islamabad Rawalpindi Diocese. He was born on 8th September 1977 in a large catholic family and did his initial studies from a government high school Sargodha City.

Having worked for many years in various trades, he joined the Marist Brothers in the year 2003. His initial formation was in Peshawar under late Brother Water Smith. On 17th February 2007 he made his first Religious Profession as a Marist Brother in Sri Lanka. In returning to Pakistan he worked for three years in Faisalabad and Peshawar. He was involved in full time teaching, hostel warden and working with young students. In October 2012 he returned from his Post Novitiate Formation and since then he has been full time teacher and since April 2014, he is the Principal of St. John Vianney Boys High School, Peshawar City.

After many years of reflection and having done on month retreat in Sri Lanka, he made his decision to commit himself for life to the Institute of the Marist Brothers. Therefore, On Saturday 11th October 2014, he made his Final Profession as a Marist Brother in St. John Vianney Parish. Fr. John William the parish priest and Fr. Roy Pierece, MHM, were the celebrants. Br. Michael De Waas, the councilor general, who was visiting Pakistan, had graciously agreed to receive the Vows on behalf of Br. Emili Turu, the Superior General of the Marist Brothers. Many students, the staff of St. John Vianney Boys High school, many friends, Marists from three Marist Schools and many Religious participated and witness the occasion.

After the Eucharistic celebrations Br. Ben was led with drums and dance to the school where a festive meal awaited for us. It was a beautiful day of celebration and thanksgiving to God for his fiat, vocation and life to the Marist institute.