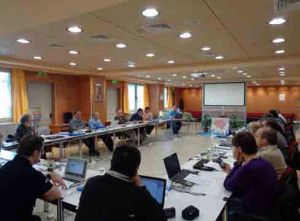 The European Mission Team, a commission within the European Marist Conference (CEM), met in Athens from Oct. 26 – 27 to discuss the possibility of establishing a network of Marist schools in Europe.

“The idea of creating a network of Marist educational works in Europe was welcomed very well by the members of the meeting,” said Brother João Carlos do Prado, director of the
Mission Secretariat.

“It is important in order to guarantee the future of the Marist mission in Europe,” he told the general house press office on Oct. 29.

The encounter took place within the meeting of the European Conference of Provincials, held from Oct. 25 – 29 also in Athens.

All of the provincials from Europe, including the newly appointed ones, and another representative from each Province participated.

The next steps will be to establish the type of network, how it will be organised and implemented, as well as its contents, by the next meeting of the CEM, which will take place from May 22 – 26 in Lisbon, Portugal.

The Mission Team will meet again in Spain on Dec. 18 in Alcalá de Henares and on Feb. 9 – 10 in Guardamar del Segura.

In the Compostela province, short-term stay will be available for migrants through Caritas and the Red Cross, as well as education for children.

Lardero, in the Ibérica province, is offering accommodation and the Mediterránea province affirmed it is offering homes through the Church.

L’Hermitage province recalled sending a letter to Brothers and communities in October with guidelines and criteria for receiving migrants and refugees. The province explained it had experience from previous years, but that the numbers have increased due to the situation of Iraq and Syria.

The general house in Italy affirmed it is considering the types of help it will offer for temporary migrants and those who are requesting residency. It is also revising the spaces it will offer and reflecting on the implications this will have for the community.