A group of faculty and staff from Marist schools around the USA Province gathered at the Marist Brothers Center in Esopus from April 8th – 10th for an Embracing Our Call retreat. The retreat was based on the theme “Making Jesus Christ Known and Loved,” and encouraged participants to reflect deeper not only on their Marist identities and spirituality but also their personal relationships with God.

Br. Owen Ormsby opened the experience with the usual “Welcome Home” greeting but added how important it is for those who are usually on the giving end of retreat experiences to take this time to be on retreat themselves.

And participants rose to the challenge. After an opening Mass with Fr. LaMorte, the group went into a contemplation on the idea of “holy Longing” – on why they had come, and what they were longing for.

Br. Don Bisson presented on spiritual practices, followed by Matt Fallon who introduced the Grand Silence for Sunday night. The evening ritual included the placing of the cell phones on the altar.

On Monday, we began delving into the three calls of the Nairobi New Marist in Mission gathering – to be mystics and prophets, in communion. Brothers Don Bisson and Luis Ramos spoke on those topics respectively, while also inviting some contemplation and deep listening. On Tuesday morning, Br. Owen spoke about the idea of communion, using Gathered Around the Same Table as a resource document.

In between and during breaks, participants had a chance to create a rice mandala, to walk the labyrinth, to make soul collages, to journal, and to enjoy the beautiful Esopus property.  Several members of the group also took an afternoon trip to Chiz’s Heart Street mission in Kingston.

Morning and evening prayer, as well as Henry’s wonderful meals, rounded out the schedule. 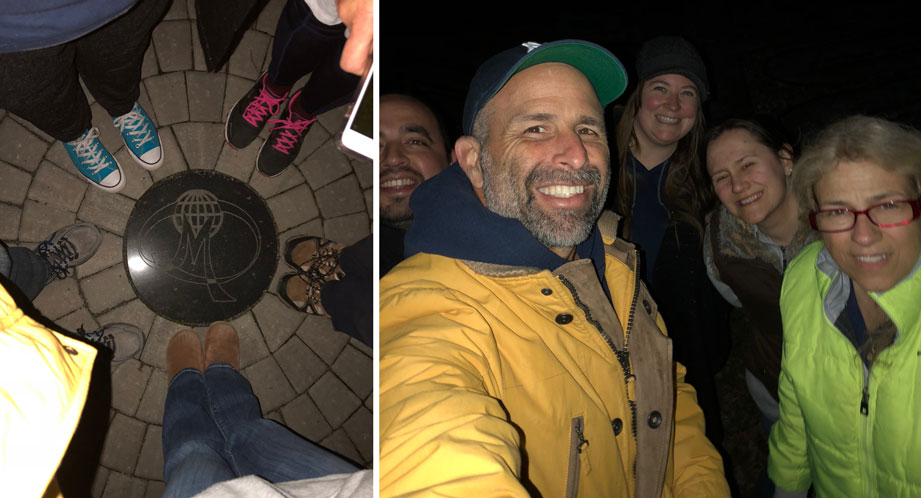 Some of the comments made by participants about the experience:

“The photo of our shoes on the center of the labyrinth made me think of all of us walking the walk – while talking the talk.”

“Gave me a spiritual boost and gave me a better sense of my Marist identity.”

“This did allow me to go deeper as it provided the quiet away time I needed.”

“Thank you all for such a spiritual encounter. I was blessed to be surrounded by such Christ-like souls!”

All of the participants seemed to feel that the way the talks were presented, combined with the quiet time, truly helped them to bring the concepts of mystic and prophet in communion into their everyday lives. One comment, “Brought ancient concept into today’s world. Loved talking in small group to identify with signs of the times.  Tied in very well with the visit to Heart Street.”

Overall, it was an amazing experience of meeting God, of growing in our spirituality and Marist identity.