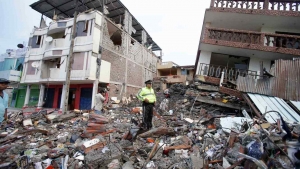 An earthquake of 7.8 degrees on the Richter scale hit Ecuador on April 16.
“None of the brothers, people linked to our mission nor our works have been affected,” stated Brother Laurentino Albalá Medina, provincial econome of Norandina.
Reports so far say the earthquake has left over 570 deaths and 4000 injured, as well as countless houses and public structures destroyed.
“In Quevedo, they were without electricity and without possibilities of communicating for a long period after the quake,” Br Laurentino affirmed. “I was able to speak with Br Galo on Sunday and they (the Marists) are all well.”
“Santo Domingo has also been affected in some areas, but our school has not had any major damage,” he added. “But yes, there was some damage to the computer lab.”
The earthquake was also felt strongly in the capital, Quito, but with less serious consequences.
“We are trying to collect data so we can analyze the best way to help the victims, according to our possibilities,” said Brother Laurentino.
Ecuador belongs to the province of  Norandina, alongside Colombia and Venezuela. Marists have several educational works in the country.
Your Gifts Impact
Support Our Mission