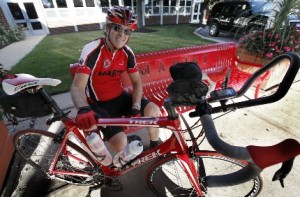 Owen Glennon, a math teacher at Marist High School, 4200 W. 115th St., biked more than 1,000 miles this summer to raise money for the South Side school. “It was an adventure, that’s for sure,” Glennon said of his 1,054.6-mile cycling odyssey from New York to Chicago.(Karen Callaway/Catholic New World)

There were moments when Owen Glennon wondered what he was doing, times he even questioned his sanity.

But then, Glennon, a veteran math teacher at Marist High School who biked more than 1,000 miles this summer to raise money for the South Side school’s financial aid coffers, would read emails from students offering their support or be joined by alumni for one of his 70-80-mile bike rides.

In those moments, the answers were gloriously clear.

“It was an adventure, that’s for sure,” Glennon said of his 1,054.6-mile cycling odyssey from New York to Chicago this summer. “I was venturing out into the unknown to take on unknown situations, but there was always a greater purpose.”

Over the next 14 days, Glennon weaved through the back roads of New York, Pennsylvania, Ohio and Indiana before crossing into Illinois. His adventure loosely mirrored a journey the Marist Brothers themselves had taken nearly six decades prior in traveling from New York’s Hudson River Valley to Chicago’s Mount Greenwood neighborhood.

One particular highlight came on July 10, when Glennon and his wife, Carlin, who drove his support vehicle throughout the entire journey, entered South Bend, Indiana. There, Marist alum Chuck Lamphier, who works as the lead advisor to the vice president for mission engagement and church affairs at the University of Notre Dame, organized a Mass with the Marist Brothers. At a dinner that evening, the university presented both Glennon and Carlin, a teacher at St. Michael School in Orland Park for the last 12 years, the Sorin Award for Service to Catholic Schools.

Two days later, Glennon pedaled onto Marist property, his professional home since 1976, to complete his expedition.

Some of his Marist colleagues, many of whom followed Glennon’s journey via his blog (www.maristcyclingadventure2015.com; see excerpts in Church Clips, Page 25), mentioned that Glennon’s adventure resembled a pilgrimage.

In many ways, Glennon said, they were right.

“When you’re out there, you are influenced by the beauty of the road and the people you meet,” Glennon said. “It’s easy to think about how fortunate you are and what God has provided you and I returned inspired and thankful for the people and beauty in my life.”

Birth of the adventure 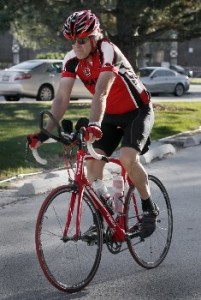 An avid cyclist, Glennon said the idea of a charity bike ride for Marist High had percolated in his mind for two years, prompted by a cross-country bike ride from Anacortes, Washington, to Brunswick, Maine, in celebration of his 60th birthday.

Last year, Glennon began formalizing plans, plotting his route and discussing the adventure with colleagues and students. As the trip neared, he became increasingly excited about shining a spotlight on Marist and the noble work of the Marist Brothers. He was also eager to connect with alumni and generate support for current Marist students, about 30 percent of whom are on financial aid.

When Glennon first broached the idea of the trip with Marist President Brother Hank Hammer, the school administrator said he was “wowed.”

“Owen’s starting his 40th year here and he’s an incredible example of a man who has made a devout commitment to Catholic education,” Hammer said. “This journey is witness of his commitment to the kids of the school.”

Glennon initially set $40,000 as his goal, working with school administrators to see that the funds raised would go directly toward financial aid at the school, where the current tuition sits at $11,300.

Donations poured into the school from more than 350 donors representing over 40 Marist graduating classes and Glennon’s adventure corralled more than $75,000.

“It was humbling to see so many willing to support Marist High School and this effort shows how a lot of people making little offerings can produce a grand result,” said Glennon, hopeful that his ride inspires others to be Christian adventurers willing to tackle new and exciting challenges that benefit others.

While there are any number of noble causes in the world, Glennon called Catholic education “so very important in this day and age.”

“We are teaching our kids core subjects, but also about life and spirituality,” Glennon said. “When kids start a journey at Marist, I want them to be able to finish that journey. That’s what this endeavor was really about.”

Acknowledging that some educators’ “fire burns down” as retirement nears, Hammer praised Glennon’s commitment to the school, which includes active involvement with the math honors program and coaching the school’s math team.

“Owen’s still immensely passionate about what he does and believes in the potential of our kids,” Hammer said. “We are so very blessed to have him on our team.”