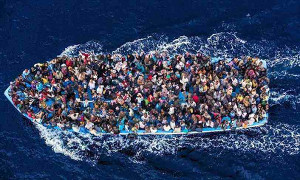 World Day of Migrants and Refugees is celebrated on Jan. 15 and for this occasion, Pope Francis has written a message titled: Child Migrants, the Vulnerable and the Voiceless. The Marist community “Lavalla200>” of Syracuse proposes a comment relating to his text.

“I feel compelled to draw attention to the reality of child migrants, especially the ones who are alone,” writes Pope Francis. “In doing so I ask everyone to take care of the young, who in a threefold way are defenseless: they are children, they are foreigners, and they have no means to protect themselves. I ask everyone to help those who, for various reasons, are forced to live far from their homeland and are separated from their families.”

Muhammad is not a child. He said he was 17, like everyone else does when they arrive, but he is actually 22. He is huddled in a corner of the room and it does not take much to realise the sadness that dwells within him.

In his culture, a man cannot afford to cry, yet when you take him under your arms and press him tight, you can see that little tear through dark skin that makes it all the brighter, and he tells you how he has had to leave everything and everyone in the hope of a better future that he now fails to catch a glimpse of.

He has left behind: family, work, culture, language … and now he realises firsthand how difficult it really is to live in that Italy that everyone depicted as an earthly paradise. He feels alone more than ever.

“Not only does this concern those looking for dignified work or better living conditions, but also men and women, the elderly and children, who are forced to leave their homes in the hope of finding safety, peace and security (…),” the Pope continues. “It is not unusual for them to be arrested, and (…) they can be incarcerated for long periods, exposed to various kinds of abuse and violence.”

Elmadani (he has also claimed to be 17) is not afraid of telling how soldiers would once a week come to his village to raid everything and rape women. He has always managed to hide, but when the raids became more frequent those at home encouraged him to escape, to run away. But the path that would bring him to safety turned into a gruesome odyssey. He saw friends die at his side, was forced to steal and prostitute himself, did several months in prison alongside criminals, got on the boat of salvation and arrived in Italy.

Elmadani is a good boy. He has learned Italian well. During these days, he will receive a residence permit and hopes to find a job to help his family. We still cannot conclude as the beautiful fairy tales of the past once ended, but success stories like his are unfortunately not frequent.

“In many areas of the world, reading, writing and the most basic arithmetic is still the privilege of only a few,” reads the Pope’s message. “All children, furthermore, have the right to recreation; in a word, they have the right to be children.”

Samir has just turned 18 officially, but he will admit to you that he is 23. There are no schools in his country and as a child he followed his father’s work in the fields that were never able to provide the family with enough food.

Misery is the norm for everyone and leaving home and leaving home meant one mouth less to feed and, in the future, a possible help for the family. He has been in Italy for more than a year. He can neither read nor write but manages to make himself understood.

We tried to convince him to learn to read and write, and for a while we thought to have succeeded: writing the letters of the alphabet for the first time… 23 years old, no documents, no prospect of work, with the danger of being deported… When I meet him and I speak with him, he smiles at me and tells me: “dad you understand me!”. Yes, I understand, I’m at his side, but I realise that this is not enough and that the future for him will not include all of the colours of the rainbow.

“Their precarious situation deprives them of documentation, hiding them from the world’s eyes (…). In this way, migrant children easily end up at the lowest levels of human degradation, where illegality and violence destroy the future of too many innocents, while the network of child abuse is difficult to break up.”

And I think of 13-year-old Abdul who is hospitalised. He cannot communicate in any language we speak: he only knows the dialect of his tribe. I visited him a few times, but I assure you that it is hard to be with him and invent something that could interest him.

But Abdul is fortunate because he is male and he is alive! Until just a few days ago, he did not exist. It was only after disembarking that he got a name and an age. How many children like him have vanished because someone needed their organs… How many girls were forced into prostitution…

I look at him and he smiles at me and I ask myself how the human heart can become so insensitive to the point of taking someone’s life away for one’s own interests. And to say that we all thought that Cain was character of the Old Testament!

“Lastly, I wish to address a word to you, who walk alongside migrant children and young people: they need your precious help (…),” the Pope concludes. “Do not tire of courageously living the Gospel, which calls you to recognize and welcome the Lord Jesus among the smallest and most vulnerable.”

In Syracuse, we are just getting started and we have chosen to walk next to underage, vulnerable and voiceless boys. We are at the beginning and what we do is really just a water drop in a big ocean, but we like to add that which Mother Teresa was fond of repeating: without us, “the ocean would be less because of that missing drop.”

From the “Lavalla200>” Marist community of Syracuse 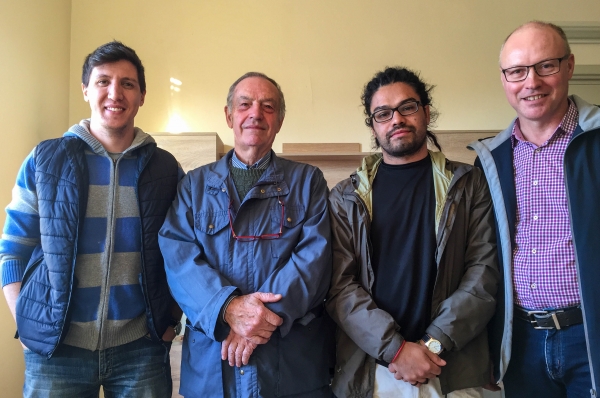 Marist Experience of attention to the migrant population