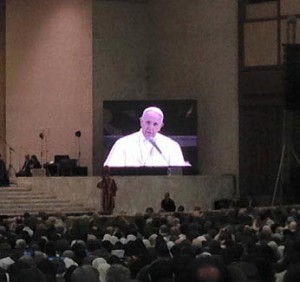 Marists join 5,000 for closure of Year of Consecrated Life

Around 30 brothers took part in a four-day event, including a papal audience, which marks the closure of the Church’s Year of Consecrated Life.

Brothers from the General House and 15 others from the five Marist provinces of Europe attended the Vatican’s ‘Consecrated Life in Communion: International Encounter’ from Jan. 28 – Feb. 2.

“I think what is fascinating is that it’s not just brothers and sisters in the traditional manner and this will challenge our paradigm of what consecrated life is,” said Brother Tony Leon of the secretariat Brothers Today. “We’re in an exciting period of discovering new ways of expressing consecrated life as baptized members of the Church today and as married men and women or as
religious, identifying with particular charisms, seeking union with God through apostolic and/or contemplative service,” he told the general house press office on Jan. 28.

The gathering started on Friday morning with an introduction by Cardinal João Braz de Aviz, Prefect of the Congregation or Institutes of Consecrated Life and Societies of Apostolic Life, followed by talks led by various religious.

On Saturday and Sunday, the participants were divided into five different locations across Rome, according to their form of consecrated life, to assist seminars.

Then on Feb. 1, all of the consecrated gathered at Paul VI Hall for a panel discussion on the topic ‘Consecrated today in the Church and in the World. Provoked by the Gospel’ and an audience with Pope Francis.

The evening closed with a concert titled ‘On the Trail of Beauty’ directed by Monsignor Marco Frisina of the Vatican’s Pastoral Worship Center.