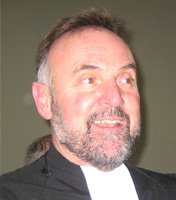 Novice Master
I found a group of men with a vision, who loved and cared for each other and those entrusted to their care. They taught and counseled, they were men of deep faith who found simple and tangible ways of expressing their relationship with God, and they were interesting people who did some very attractive things.

My first contact with the Marist Brothers took place when I was a high school student at St. Mary’s in Manhasset, NY. At the time, most of my teachers were Brothers, and I found them to be good teachers, concerned for me and the other students, hard-working and very interesting.

During my senior year, I was invited to attend a retreat called the Encounter, which turned out to be a life-changing experience. Part of the retreat included sharing our life stories and any concerns we had within a small group. The care and honesty I found in that group was amazing. Our leader was a college student who was becoming a Brother. I remember leaving the Encounter thinking, “If I could help other people the way that student Brother helped me and the others in the group, that would be an amazing way to live my life.”

A few months later I was asked to become a team member for the Encounter retreats. I attended a workshop, and one of the Brothers leading the event asked if I had ever thought of becoming a Brother. This got me thinking, and I began seriously looking at becoming a Brother, or a priest. I wrote to different groups, met with vocation recruiters, and felt that my real home would be with the Marist Brothers. Six months later I was living in Esopus as a postulant.

In formation I became more and more comfortable with who I was and how connected I felt to my Brothers. I enjoyed living in community, and living and working with these men. As part of formation, I began to study more about the Marist Brothers and consecrated life. I saw the vows of poverty, chastity and obedience as great ways of being in this world: responding to God and serving God’s people in a counter-cultural manner of living. I wanted to grow deeper in my relationship with Jesus and I found the support and help in the daily community prayer among the Brothers. Over the years I have found that I’ve been challenged, encouraged and supported to become who God wants me to become, and I’ve done that with the continued love of my Brothers.

I’ve been called to many ministries as a Marist Brother, and I find being the Novice Master to be the most challenging and exciting work that I have had. I’ve taught, counseled, administered, worked as a college Campus Minister, recruited for the Brothers, ran an international volunteer program and served in leadership within the community. The Novice Master is entrusted with the future of the community. There are 16 Brothers who serve in the ministry around the globe, mentoring nearly 100 novices from the 80 countries where the Brothers live and work. We have the privilege of welcoming our newest Brothers, and of forming them into the next generation of Marist Brothers.

Almost 200 years ago when St. Marcellin Champagnat found his first recruits, he did a radical thing: as a priest, he moved out of the rectory and went to live with his first Little Brothers of Mary. In that decision, he set an example for all future Novice Masters – to be with our new Brothers, share their lives, teach them by our lives, pray with them, eat with them, and let them know firsthand what this life is meant to be. That example has kept me very humble. I have certainly seen my strengths and weaknesses as a person and as a Brother, and the thought that I have been asked to help in the formation of the young men entrusted to my care is something I take very seriously. Having said that, I love the work! It is awesome to meet our new Brothers, who come with enthusiasm, openness, and a strong desire to live this life and to work with young people.

The Master of Novices serves as a bit of a bridge to the community. He knows the community well and he is encountering the next generation and all the gifts, concerns and the needs that they bring to the group. The Novice Master needs to be able to help both the established community and the new members live, pray and work together. What is the gift of the millennial generation to the Marist Brothers? I find that is one of the challenges of my work: to experience, name and support who the Marist Brothers are becoming because of who God is sending to us.

My life as a Brother has brought me to a civil war in Liberia, a papal audience in Rome, and has included teaching in primary, secondary, college and post-graduate ministries in a number of states. I’ve been asked to serve as Vice Provincial and Provincial here in the U.S.; I’ve worked in summer programs and camps, and coached or moderated swimming, tennis and rugby teams. I established a men’s spirituality program for college students, and have worked on hundreds of retreats. I’ve found that each of these ministries has given me the chance to create relationships that I have found most fulfilling. Though the Marist Brothers do lots of interesting work, it is the presence, as a Brother, with young people, that has been the most meaningful part of my call.

For many young people today, it is that relationship with the Brothers that helps them remain, or get connected, with God. It is our presence in schools, at co-curricular events, eventually at their weddings or the baptism of their children. It’s being available when they lose a job or a loved one; it’s sharing the joy of helping them shop for an engagement ring, or make the decision to apply to become a Brother. It’s the presence with those entrusted to our care that makes each part of our life—community, prayer, and our vows—take on profound and counter-cultural meaning. Marcellin said it well when he said, “A Brother is a man for whom the world is not large enough.”

Make us good caretakers of the land on which we depend.