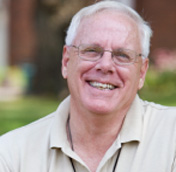 As a kid attending Catholic grade school in the 1960’s, I heard a lot about vocations, but I wasn’t really sure if religious life was an option for me. Oddly enough, it was in public high school where I started seriously thinking about becoming a Brother. At that time, I probably would have jumped right into the Christian Brothers, but rules had recently changed and we were asked to attend college before making a final decision.

I decided on Marist College and spent the next four years seriously contemplating my future. At Marist I had a lot of contact with Marist Brothers who influenced me greatly, but I also hung out with friends, dated and had the typical college experience. I knew in college that I wanted to become a teacher. That, combined with the service-minded climate of the 1970’s and the closeness I had come to feel for the Marist Brothers, sealed my decision to join the community.

I loved my first seven year as a English teacher at Marist High School in Chicago, but I would say that I really learned how to be a good teacher during the next five years I spent teaching English at Mount Saint Michael Academy in the Bronx. The Mount students challenged me because they were rough and tumble city kids; very different from the kids I have previously taught. I had to be much more creative with them, to get them interested and keep them focused.

I remember one junior class with kids who really struggled with the material. I was teaching Macbeth to them, which of course is not easy for any kid to embrace. This group decided to act out the famous dagger scene from the play, and they really got into it. They changed the language to suit them and really made the scene come alive. It was so rewarding for me as a teacher to watch students “get it,” especially because it was a group who may not have been able to do that without the right inspiration and the opportunity to work it out for themselves.

I’ve had so many teaching experiences where I’ve seen academically challenged kids grow in self-confidence. Being a Marist Brother has given me a strong set of values to share with my students, and an ability to create a sense of family and community in and out of the classroom. It is so rewarding to me when my former students come to me years later, with children of their own, wanting them to have similar experiences in a Marist school.

The bottom line for me is that I love what I do. Looking back on myself as a young man, I know that I wasn’t 100% sure of the leap of faith it took to become a Marist Brother. Now I know that nothing important is ever that certain, but I’m grateful that I took the chance. The students I’ve encountered, the faculty with whom I’ve worked, and the Brothers with whom I’ve lived in community have helped me realize that my initial decision made was the best one I could have made.