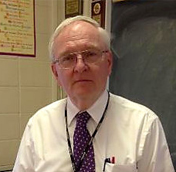 Whether you know him from chemistry, see him smiling to you in the hallways, or have talked to him when he was your academic counselor, Brother Kevin Brogan has impacted your life. Over four decades later and Brother Kevin still continues his wonderful vocation. Brother Kevin was born in New York City. He graduated from Archbishop Molloy High School in 1963, and Marist College in 1968 with a bachelor’s degree in Biology.

Brother Kevin was originally inspired to be a brother by other brothers who were his teachers and his parents who encouraged him to consider this vocation. They never pushed him but they always were there to encourage him.

Since he chose to become a Marist Brother, Brother Kevin knew that a major part of the vocation was to educate young students- especially the disadvantaged at the time. There was a need for Chemistry teachers in the schools that he had been involved with. Being a brother, he helped out wherever he could. Flash forward to 2013 and Brother Kevin is currently teaching Chemistry to sophomores, and advising them as an academic counselor.

Brother Kevin is truly altruistic and attentive. He will find examples such as driving in fog with headlights on low beam to make real life connections of chemistry topics for students to recognize. His favorite part of teaching is to see students try to and succeed in grasping some concept that they originally thought they could not understand. Because of this, he will stay as long as he possibly can before and after school to help any student in need, and stay remarkably patient in helping the student come to the epiphany about the wonderful world of ionic bonds. In regards to being a brother, his favorite part is the brotherhood that is shared by the brothers towards each other.

For Brother Kevin, good teaching is to be caring and understanding that we are all different and that everyone cannot grasp concepts, regardless of the subject, equally or as quickly as the next person. When you have done a good job, you know this since your past students will come back and say thank you.