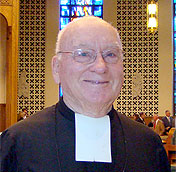 Brother Joseph Teston, F.M.S., celebrates his 70th anniversary with The Marist Brothers this year. A pioneer, he was one of the first four American Marists to begin a Marist ministry in the Philippines in 1948. Br. Joseph spent 25 years in the overseas mission; he taught high school, college and helped build a thriving Marist community that transforms the lives and situations of thousands of young people through education. Br. Joseph reflects on his years in the Philippines and life with The Marist Brothers.

I’ve always been comfortable as a Brother. Marist Brothers taught me when I was a little kid in grade 1 (I was born and raised in Savannah, Ga.) all the way through College. They influenced me the whole way. Absolutely, I admired them. Otherwise I wouldn’t have joined them. I never had a doubt.

In 1948, four of us were sent to the Philippines. We did fantastic things. The people were poor. But everybody was poor therefore nobody was poor.

The Oblates of Mary Immaculate priests were already out there; they would start something and then pass it on to us. So we took Notre Dame High School. Then the Oblates started a college department and The Marist Brothers were the only degreed people who could teach. We ran the high schools during the day and taught at the college at night. This is perfect example of what community can accomplish: cooperation and collaboration – that’s what I’m proud of.

I spent 25 years there. And the most rewarding thing about it is that we did not go there to perpetuate the American Province. Altogether, the USA sent 39 Marist Brothers to that mission, and today there is only one American Marist Brother there. We replaced ourselves with Filipino Brothers — there are over 50 who run everything.

I am still in touch with many of the Filipino Brothers and just got back [from visiting the Philippines] about a month ago. I appreciate the fact that I was with a group over time. I was part of a congregation as a community, as a Church. And as a group I believe one can accomplish more than as an isolated individual. This is certainly true of my Marist story.