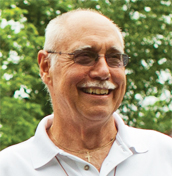 Back in the 1950s when I was attending St. Helena’s High School, I met some fine men, some Marist Brothers who were very inspirational to me. They seemed to be happy; they seemed to be enjoying what they were doing. They enjoyed teaching. They were just good men, and I said to myself, “Gee I’d like to one day do that.”

After becoming a Marist Brother, I taught for 13 years. During this time, I began to feel a deeper calling. Being a Marist Brother wasn’t just a superficial thing because it was a great career, which was also nice and fun, but what I felt was much deeper. I realized that it was a spiritual calling to reach out in order to Evangelize young people. I felt compelled to follow our motto, “Making Jesus known and loved.”

My experience as a Marist Brother is varied. It’s much different from most. After many years of teaching I did campus ministry in Brownsville, Tex. While doing that, I was doing retreat work. We developed a retreat ministry that we could take with us and could be done in just a couple of hours at a parish hall or any location. There were a lot of kids who couldn’t afford the weekend retreats, so we would go out and reach out to them. Those were some of the most cutting edge, exciting experiences that I had early on.

I eventually realized that I had quite the knack for music. Music has a community-building affect on people. It built a very strong community amongst those of us in the retreats. While we spent hours working on our music together, we were also developing our own relationships with God as well as our relationships with one another. Music strengthens and empowers the ministry.