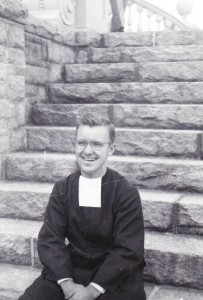 I was born on July 26, 1930, in the city of Martins Ferry, Ohio, located on the Ohio River, directly across from Wheeling, WV. It must have been a particularly difficult time for my parents for my 15 year old brother William, was seriously ill. He passed away a month after my birth.

My father, William, was born and raised in Martins Ferry and my mother, Margaret, was a native of County Kerry, Ireland. I was blessed to have three sisters and four brothers. Michael, my oldest brother, joined the Franciscan Friars and was ordained and priest given the name Denis.

My elementary education was at St. Mary’s School in Martins Ferry conducted by the fondly remembered Sisters of Charity of Nazareth, KY. My brothers and sisters had attended Martins Ferry High School and it was my wish to follow in their footsteps. With some disappointment, I received word from my father to go over to Wheeling and register at the Marist Brothers’ school. I was not a happy camper the first weeks of high school for I knew none of my classmates. Central Catholic HS had a fine reputation in the area and some wonderful, dedicated teachers. Especially memorable were Brothers John of the Cross, Paul Felix, Paul Stratonic and Sixtus Victor.

Supporting a large family on a working man’s wages my parents could not afford to send my older siblings to a Catholic high school, but I was blessed. My brother Edward, who had wished to attend Central Catholic, told my father he would cover my tuition for he had a fine job in Detroit.

At one point in the high school years, I thought about a vocation to the Brothers, but then a career in law took center stage.

As graduation from Gonzaga University in Spokane, WA drew near I considered graduate work at the Georgetown School of Diplomatic Service or applying for entrance to the Marist novitiate. After consultation with Father Carney SJ, I decided to apply to the Marist Brothers.

The postulant and novice years were spent at the formation house in Tyngsboro, MA. At this time there were about 90 young men in formation. The guidance, example and care of Brothers Pius Victor, John Berchmans, Stephen Urban, and John Francis was edifying. What fine men they were!

From the novitiate it was off to Marist College in Poughkeepsie, NY. Having completed my bachelor’s degree at Gonzaga, my year at Marist College was spent in diverse duties. I worked in the tailor shop and also in the print shop with the kindly, effervescent Bro. Tarcisius. I also took a number of education courses. In August, 1955 it was off to the Bronx, NY for my first teaching assignment at Mount Saint Michael Academy.

During this teaching assignment, I was permitted to enrollat Fordham University to pursue a Masters degree in U.S. History. In later years I was fortunate to attend an NSF program at Bucknell University, a General Electric Economic Fellowship at Union College, courses at New York University and also earn an Administrative Certificate during two summers at NYU Plattsburgh. 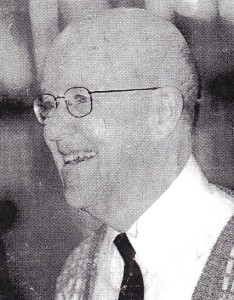 After teaching biology at MSM for six years, I was transferred to Our Lady of Lourdes HS in Poughkeepsie. It was sad to leave the Mount, a community of sixty-five Brothers and a wonderful school. However, looking back, my favorite teaching assignment was at Our Lady of Lourdes. There I had the opportunity to teach U.S. History and Economics to students who were challenging, attentive, enthused and most respectful.

Five years later it was back to MSM where six years were spent as Principal. In 1973, I was most fortunate to attend Center Champagnat, a Marist Brothers renewal program in Rome. There were 37 Brothers from 17 countries enrolled in the six month program. The next year brought me back to Marist Chicago where I served as Assistant Principal. Five years later it was back to MSM in the Bronx as Assistant Principal. Requesting a return to my first love, teaching, reassignment brought me back to Chicago. After teaching a number of years, the Principal requested that I assume the position of Dean of Discipline.

The end of the school year in May, 2011 brought retirement. Marist and Chicago are wonderful places to retire. Living in a community attached to the school provides opportunity to still be somewhat active in the school and to attend athletic and other extracurricular activities. The city itself has excellent public transit, a magnificent lakefront where I like to walk and a summer program at Millennium Park where free concerts are offered three times a week.

In addition to serving as Director of the Brothers community, an activity I find most rewarding is the SPRED Program at a local parish where we work with developmentally challenged young people.