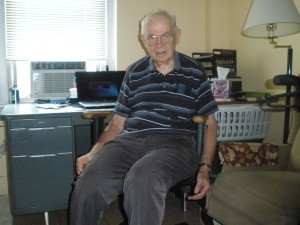 When a Marist Brother visited his high school to recruit vocations, Robert Leclerc signed up.

He made his first vows as a Marist Brother in Tyngsboro, near Lawrence MA on July 26, 1950. For 56 years a top-flight high school math teacher in MA, NY and OR, he earned an MS in Mathematics at St. John’s University in 1960. 1965-66, he participated in a renewal program at the Marist Brothers international headquarters in Rome. From 1966-76, while teaching at Mount St. Michael Academy in the Bronx NY, he presented accelerated Math classes on television from a studio at New York’s St. Joseph’s Seminary, teaching some 300 students 3 times a year to help them earn a NY State Regents Diploma. 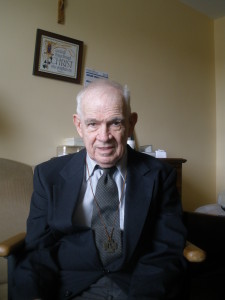 Brother Robert says his most challenging and satisfying time as an educator came at Marist High School in Eugene OR beginning in 1976. At first the students strongly resisted doing homework. With the backing of his Principal, Brother Patrick Magee, Brother Robert introduced Advanced Placement classes for the underclassmen, helping them before and after class. The school’s graduates went on to excel in math at Universities like UMass, Stanford and Notre Dame. He especially remembers Jean Schultz, who earned a Math degree at Yale University. During his 6 years in Eugene, Brother Robert also organized a volunteer group of students who cleaned and maintained the school’s buildings and grounds every Saturday.

Since 2007 Brother Robert has been living a quiet prayerful life at Champagnat Hall, a Marist community for elderly Brothers that adjoins Mount St Michael Academy in the Bronx. In spite of contending with Parkinson’s, 6 days a week Brother makes his way across a parking lot, climbs two flights of stairs to the school’s main office, gathers incoming mail for his community, and returns. Back in the community, he also makes sure that the refrigerators on the first and second floors are stocked with refreshing soft drinks every day. Daily, in his humble, patient way, Brother Robert inspires those around him with his warmhearted care and deep faith.