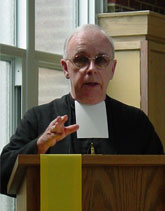 I was born in Lewiston, Maine on May 20, 1935. Growing up in that city I attended the local Sts. Peter and Paul Parish and School and graduated from St. Dominique, the local High School.

My family was of French Canadian stock so my native language was French at home, church and in school. The city was 95% French speaking at that time. My father had eight brothers and sisters who were born in Canada and lived in Lewiston. My mother had seven brothers and sisters. This meant that family gatherings were very large and frequent. On my father’s side my aunt Alice was a Blessed Sacrament nun and my uncle Steven was a Marist Brother.

My father, Romeo was a businessman and my mother, Jeannette a homemaker. I have a sister, Louise and a brother, Robert. I’m the oldest.

My first encounter with the Marist Brothers was with my uncle Steve, whom we used to visit in Lawrence and Lowell, MA. He spent most of his vacations in Maine with the family.

After attending St. Michael College in Vermont for one year, I decided to join the Marist Brothers in Tyngsboro MA. I enjoyed my novitiate years, especially with the old French Brothers who worked the farm. They were great role models and grandfather figures. The teachers at Marian College in Poughkeepsie NY were very professional and caring, making my three years there stimulating.

After 3 years of teaching, I was assigned to Catholic University of America to become a dorm proctor and a full time student for a Masters Degree in Library Science. This prepared me to develop the Library and Audiovisual department at the recently opened Marist High School, Chicago. Beginning from scratch in both print and visual media gave me a great perspective on developing a coherent educational program for the school. I was elected Chair of the library section of the Illinois Catholic School Association.

In 1997 I was offered a sabbatical. I spent three and half months in the fall of that year at the Spiritual Life Institute in Crestone, CO in my own hermitage. The following year from February to May I was at the St. John’s University Holy Land program in Jerusalem. That year was very precious to me and allowed me to put flesh on the events of the Old and New Testaments.

My career as a teacher has seen me in elementary school for a year, then in high school teaching Religion, Spanish, French and ceramics. I spent five year as a diving coach, intramural gold club moderator and moderator of the television club. Eric Lindahl and David Keate are two students that stand out for me. The first was a three-year student in potter’s wheel and the latter was a diver on the diving team.

In 2000 I retired after 41 years in the classroom. What stands out is how quickly those years have passed. I have been blessed with cherished comrades all along the way. At present I continue pursing my interest in food preparation, gardening and icon painting. I have been responsible for making the meal menu for the community since 1999. Gardening, home repairs and icon painting are also of great interest and give me much satisfaction.

My favorite prayers are: The Jesus Prayer, which I began in 1971 after attending some Catholic Charismatic meetings and conferences. The second is a prayer that St. Marcellin used: “O Jesus living in Mary come and dwell in me your servant. Impart to me your spirit of holiness and the fullness of your power….” I find this to be a complete prayer that invigorates my spirituality.

I have always had a great liking for the Christian East spirituality and since my studies in Jerusalem, I do much reading in both Catholic and Orthodox spiritualties. Going back to the Fathers of the Church enables me to appreciate the depth and insights of the early foundation of our Catholic faith. I truly find it necessary and enjoyable to reflect on Eastern spirituality, which complements my Western roots and helps me to develop a holistic approach to my Christian life.