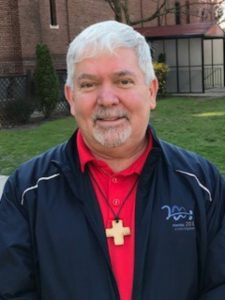 With the approval of Brother Ernesto Sanchez, Superior General and the General Council, the Brothers of the United States province have re-elected Brother Patrick McNamara to serve for a second term as provincial for the coming three years.

Br Patrick will take up office during the sixth provincial chapter held from March 22 – 25 in the Mount Alvernia Retreat House, located in the village of Wappingers Falls, New York.

Br Patrick says he “grew up very Catholic,” always attending Catholic schools. After graduation from Laurel Hill Academy, an IHM school, he enrolled at Marist College, Poughkeepsie, New York.  There he met what he describes as the “lively and attractive” community of the Marist Brothers. After completing his studies at the College, including a year of studies in Paris, France, he did his initial formation programme and novitiate in Chicago, Illinois, and was invited to make his final vows in the community.

He says that during the next 40 years, he enjoyed being a lifelong learner, a pilgrim, a teacher, a coach, a spiritual director, a disciple, a social worker, a pastor, a catechist, a vocation director, a musician, a campus minister, a provincial, a principal, a president, and a provincial again and so much more.  Many nouns to describe what he calls “a very active and happy life, filled with many graces and blessings and many new beginnings; great communities, ministries, projects, and churches, cities and towns, brothers, strangers, friends, and partners.”