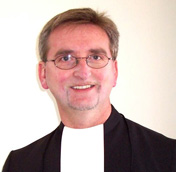 I don’t think I could have predicted the direction my life has taken as a Marist Brother. I started simply enough as a kid who was pretty religious and who considered living a religious life from a fairly young age. In high school I explored the Jesuits, but decided that my calling was not for a sacramental ministry. As I grew up, I felt a strong pull toward teaching so it was a natural fit when I came to know the Marist Brothers, where teaching is so highly valued.

During my early years as a Marist Brother, I had a variety of teaching experiences, campus ministries and administrative roles in New York, mostly at inner city schools. I also directed an alternative to incarceration program for juvenile offenders in the South Bronx. I might have continued on this very rewarding path if not for a call in 2004 to come to Rome to serve as the Secretary of the Laity Commission. In 2005, when the Mission Ad Gentes project was begun, I was asked to be the Delegate of the Superior General for Mission Ad Gentes, under the direction of Brother Luis Sobrado.

The Marist Brothers’ Mission Ad Gentes project hopes to mission 100 or more brothers to new apostolic works throughout the countries of Asia over the next four years. Knowing that we would need to conduct an extensive orientation session before sending brothers on their missions, I went to the Philippines in August 2005 to search for a house to use for the training program. By July 2009, all six session of the Orientation program will have taken place, and approximately 70 Brothers will be in their new mission lands!

I’m so proud of this program and truly awed by the more than 180 brothers who have volunteered to join this mission. Being inserted into an unfamiliar country where the people do not know about the Marist Brothers is very hard work. But brothers who have completed the five-month training and are currently working in Asian countries report that the people have been open and welcoming to the Marist Brothers. I’m pleased to have a part in ensuring the success of the Ad Gentes program. The finding of these new missions and pairing brothers with those missions is difficult, but also rewarding work.

For my immediate future, I’ll continue to lead the Marist Ad Gentes program. It’s been so exciting and such a success in a short period of time. Later, I’d welcome an opportunity to go back to my roots and teach again or do campus ministry. For now though, Ad Gentes is where I’m needed and where I’ll continue to grow as a Marist Brother.