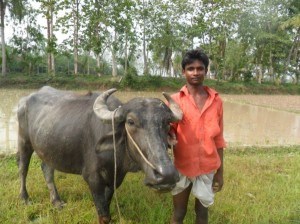 The story of the Marist Brothers is a story of passion and compassion. Marcellin Champagnat perceived us in the eyes of Jean-Baptiste Montagne, a dying youth who was leaving this world without knowing how much God loved him.  From this was born the Marist Brothers.

The life of Champagnat is a history of passion for God and compassion for the most neglected children and young people. He said: “I cannot see a child without feeling the desire to tell him how much Jesus Christ loves him”.

When Marcellin felt that God was calling him to be something greater than himself, he was without doubt like the boy in the photo. A country lad, who had dropped out of school and spent his days looking after the family livestock. It is astonishing how in a rural environment cut off from the world geographically and culturally, God could place in his heart such a breadth of vision. So much so that many considered he was not in his right mind when he said that “all the dioceses in the world enter into our considerations”. And yet, today, almost 3,500 Marist Brothers, his sons, are in 80 countries of the world.

In my own situation, living in a corner of the world as rural and lacking in horizons as the one in which   Champagnat lived, I tell myself often that one of my missions consists in convincing these youngsters that they have something great to do in the world, to open their minds, eyes and hearts. Who knows how many Champagnats there are hidden in the boys who pasture their buffalos, harvest the rice, pick tea leaves or drive a rickshaw…
When Fr Champagnat was on his deathbed, a Brother came to his bedside, took him by the hand and begged him: “Father, don’t forget us when you go to heaven”. Marcellin replied simply: “Forget you? It is impossible”. How could a father forget his sons; it is impossible. Today, at vespers of the feast of   Saint Marcellin Champagnat, from this remote corner of the Institute where I live and work, I also dare to beg him not to forget us, even though knowing that is impossible. 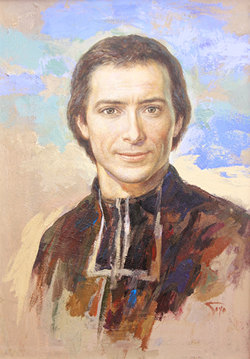 Father Champagnat, do not forget your Brothers struggling for the defence of human rights in Syria, nor the Brothers suffering enormous difficulties in Pakistan, Haiti, Cuba, Central Africa or Lebanon, the Brothers who live hidden and unknown in other countries I must not mention here, the Brothers who give up their lives each day in classrooms or offices, in the marginal districts of cities, in prestigious middle class schools or in remote country areas, the Brothers who teach in universities or in little primary schools, the Brothers who attempt to sow our charism in America, Europe, Africa, Asia and Oceania. Do not forget our leaders, your successors, who try to be your living image.

I feel proud to belong to this tradition of passion and compassion, I feel proud and grateful to feel within me too this urgency to let the children and young people know how much God loves them, to make them feel that God is good, that he is Father.