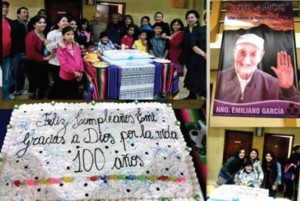 Brother Emiliano was born in Cuadros, León, Spain, on 24 June 1914. He began his vocational journey in Marist life in 1927, at the age of 13, when he entered the Juniorate in Venta de Baños, Palencia. On 19 March 1930, he entered the novitiate of Tuy and on 19 March 1931 made his first profession. He made perpetual profession on 02 February 1939, in Mar del Plata, Argentina.

Passionate for God and attracted by new mission lands in 1960, he went to Cat acocha (Loja) when the Marist work in Ecuador was still in its sowing season. In Catacocha he fulfilled the office of Rector of the “Colegio Artesanal Marista”, from 1967 to 1975. From 1976 to 1994 he assumed the responsibility of Director of the school “Nuestra Señora del Cisne” of Catacocha, where he spent the greater part of his life serving the children and young people of the region with gratuitous devotion.

Once free of direct responsibility in the classrooms, he took advantage of his retirement to undertake new projects for the benefit of the neediest community of the Paltas District. He carried out reforestation work in Fátima, encouraged the development of sand selling in Fátima, promoted the construction of the brick factory of Chininuma, created the Santa Regina Foundation to help single mothers, was the driving force behind the Cursillos of Christianity, the Charismatic Movement and the John XXIII Movement to foster the conversion and evangelization of the adults of Catacocha.

In February 2010, he was transferred to the residence for senior brothers in the city of Loja where he lives at present.

Br Emiliano today, at 100, continues to be an example of life and witness which we have the pleasure of sharing with him.

May the God of Love, the Good Mother and our Founder Saint Marcellin continue to bless his pilgrimage in this land.