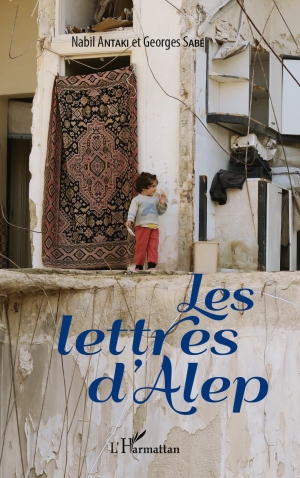 The Blue Marists have published a book based on the letters written by Marist Brother Georges Sabé and Nabil Antaki, a Syrian gastroenterologist who chose to stay in the country when war broke out in March 2011.

Br Georges, Nabil and his wife Leyle, founded the “L’Oreille de Dieu” (The ear of God) association in 1986 that aimed to help the people most in need in the city. One year after the war began, in 2012, they changed the name to “Blue Marists,” now made up of two Marist Brothers (Brothers Georges Sabé and Georges Hakim) and 80 lay volunteers, including Nabil.

The book, titled “Les lettres d’Alep” (The letters of Aleppo) is a series of letters written every couple of months to inform the Institute and others abroad of the situation in Syria.

In one of the letters, letter number 25, written on March 13, 2016, a volunteer named Rami asked Nabil why he insisted that they are a solidarity association and not a humanitarian organization.

“The answer is obvious,” wrote Nabil. “For us, Blue Marists, the “beneficiaries” are not numbers on lists, they aren’t virtual beings to be fed, housed and cared for. They have a name.”

“Behind every name, there is a face, there is a human person with his past, often unhappy or bereaved, his dramas, his sufferings, his broken dreams, his mortgaged future; a person who also has desires and projects.”

The book costs 33 euros and can be requested at the following address:

Order this book through your bookseller on: http://editions-harmattan.fr.