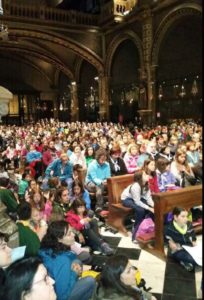 Around 3,000 people gathered for the yearly Marist pilgrimage from May 7 – 8 on Montserrat, a mountain located near the city of Barcelona, Spain.

“The environment was extraordinary and there was a clear desire to express Marist values,” remarked some of the pilgrims. In a press release, the province of Hermitage affirmed “this year, the number of participants has been the highest in recent times and has exceeded all expectations.”

Pilgrims representing the Maristes Sants – Les Corts School had double the participants it did last year. Participants included students, teachers, families, scouts and instructors of youth movements belonging to all Marist schools of the Spanish region of Catalonia. The pilgrims began their journey to the mountain on the evening of May 7 departing from different villages including Vecarisses, Terrassa, Rubí, Badalona, Barcelona, Monistrol, Collbató and Igualada.

Younger students rested for a few hours in the Monistrol sports center and in the hostel Abad Garriga, located on Montserrat. While participants received hot chocolate at the top of the mountain upon their arrival during the night, others arrived by car to take part in the morning Sunday Mass.

According to the Hermitage province, “it is an event that enables people linked to all Marist realities of Catalonia to unite in one direction and in the same space.”

“This year, it has a special sense, since it is a step on the way to the Marist bicentenary, which will take place on 2 January 2017,” it added.