The new provincial of Australia and his council took up office during the province’s Chapter from Sept. 27 – 30 in the Hermitage, Mittagong, where discussions included the possibility of creating different types of communities with laity.

“Can we imagine a Marist ‘village’ in some locations where we have, say, three houses on a property which allow for distinct forms of vocation to our spiritual family to be expressed, yet provide space for common sharing of life and mission?” questioned provincial councillor Brother Michael Callinan, before the start of the encounter.

He stressed the importance of “creating an opportunity for the Marist Association of Saint Marcellin Champagnat (which includes over 500 members) to form a new expression of communion.”

“It’s my belief that our Australian Province needs a visible model of a new way of being Marists outside an institutional setting,” reflected Br Michael. 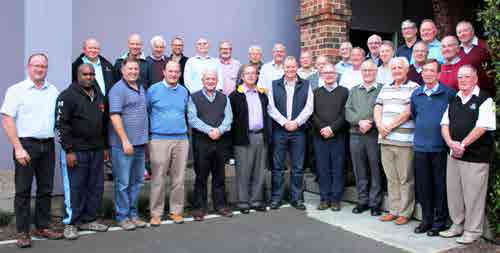 During the Chapter, the new provincial, Brother Peter Carroll, replaced Brother Jeff Crow, who will form part of the international team that will accompany the formation of the future members of international communities in the different continents
.
The Chapter also established Brothers Jeffrey Barrington, Darren Burge, Michael Callinan, Paul Kane, Greg McDonald and Ken McDonald as the new provincial council for the next three years.

According to a statement of the province, “it was a time of prayer, deep listening and shared encounter as we sought to respond to the calls of the Holy Spirit, the Church and our Marist Institute for the next three years.”

It was the second Chapter of the province of Australia, since its birth three years ago, after the provinces of Melbourne and Sydney joined.

Thirty Brothers gathered for the encounter, including vicar general Brother Joe McKee, and they began each day with Mass in the Chapel of the Annunciation.

Aside from lay members, the Marist Association includes over 100 Brothers as well as priests, sisters and a bishop.

There are over 230 Brothers living in 38 different communities across Australia, working in a variety of locations and ministries.