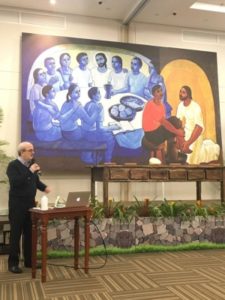 In the opening speech of the activities of the Chapter Assembly, Brother Emili Turú highlighted four elements proposed as attitudes that should motivate the Chapter: at the edge of waiting, making La Valla relevant today, a parable of fraternity and Magnificat.

At the edge of waitingrepresents the state of those who contemplate. Contemplation is one of the attitudes recommended to the capitulants as a method to achieve inner freedom and thus to separate the voice of the Lord from the other voices that disturb the Marist ideal.

Making La Valla relevant todayis the Chapter’s main task. It is not a romantic attitude, but “trying to answer the questions that really matter, with a compassionate heart like Champagnat’s: where does the Church need us most at the beginning of the twenty-first century? Where in the world are children and youth most vulnerable and in what ways do we want to serve them as a global body?”

“Inspired by the Trinity, we want to make visible the miracle of universal fraternity,” emphasised the superior general. The small fraternities that will be created among the capitulants should be a living expression of the “change we want to see in the world.” The table, as in La Valla, will be “the visual image of the value of fraternal dialogue,” as it has been in the daily life of the Institute since the Chapter held in 2009. Accepting dialogue, contemplative dialogue, is a matter of life or of death.

Magnificat was the word used by Brother Emili to thank the blessings received by the Institute during its 200 years of history and the presence of Mary, “who has done everything among us.” The superior general also wishes to thank all the committees that prepared the Chapter, the Norandina province which is receiving the capitulants and all those involved in the work of the coming weeks.