An unexpected disaster has our largest Marist Brothers’ retirement home buried under invoices totaling $39,755. I will say that no lives were lost or harmed – for that I thank God – but the financial catastrophe we are now facing is nonetheless mind-numbing. 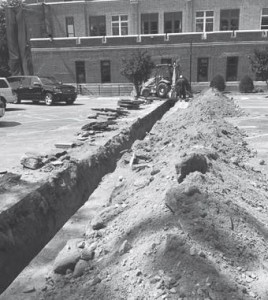 The story began last October, on a crisp autumn afternoon that beckoned Br. Edward outdoors for a brisk walk. However, as he crossed the parking lot, he caught a whiff of gas. He immediately reported the troubling news to the Director.

A gas company inspection uncovered a broken, leaking pipe that connects the property’s underground gas line to the main facility as well as an adjacent building. Sadly, the gas company was only able to provide a “band-aid” patch, since the pipe dated back to 1926 and was beyond saving. A permanent fix, we were told, was crucial. And the Marist Brothers would be responsible for all repair costs. 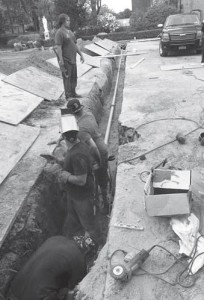 Restorations began quickly and involved securing permits, excavating an enormous tree, digging up the entire parking lot, tunneling a long, deep trench to house the new pipe, and then connecting a new pipe to the gas line. The cost was $33,660.

Next came a $3,200 bill to hook the facility’s industrial hot water heater back into the new system.

Finally, the gas line passed inspection, the hot water was running, the Brothers’ home was safe ... and we owed $39,755.

We had 90 days to pay the invoice, but when it became clear that the funds simply were not in our budget, I was granted a 90-day extension … just enough time to send an emergency appeal to our extended Marist Brothers Family. If your support arrives in time, we’ll be able to dodge financial wrack and ruin.

I cannot stress enough that I have a very short time to raise $39,755.

Any amount you can afford will be greatly appreciated – even if it’s only $25! It’s like the nickel tucked in with my letter. By itself, the coin is only worth 5 cents, but if every Marist Brothers’ friend sends what they can, the “nickels” add up and soon we’ll have the full $39,755.

I pray that you’ll send your support today.

As we approach Easter, renewing our commitment to our Lord Jesus Christ and following Him in his passion and resurrection, I have faith that you will help us! And as a heartfelt token of my appreciation for your support, I’m enclosing a special Easter prayer card. Can’t you just imagine the Easter lily’s heavenly scent?

In closing, I wish you a glorious Easter. May your spirit rejoice as you celebrate the miracle of renewed life, faith, and love for Our Lord Jesus Christ.

God bless you for caring so deeply,