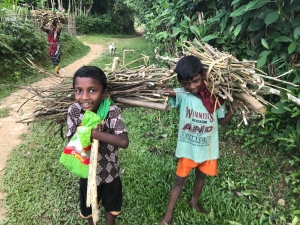 In a letter to all the People of God, the pontiff acknowledges with “shame and repentance” that “we showed no care for the little ones; we abandoned them” and invites Catholics to perform a “penitential exercise of prayer and fasting” to atone for “the errors, the crimes and the wounds” that have come to light.

In the letter, published on Aug. 20, Pope Francis reaffirms once again the need to be aware of the suffering experienced by many children and the commitment of institutions to ensure their protection:

“Looking back to the past, no effort to beg pardon and to seek to repair the harm done will ever be sufficient. Looking ahead to the future, no effort must be spared to create a culture able to prevent such situations from happening, but also to prevent the possibility of their being covered up and perpetuated.”

Child protection and child rights in the Marist Institute

In recent years, the Institute has become very aware of the serious abuse suffered by children and has laid the groundwork for guaranteeing that Marist works be safe places for them. At present, all administrative units have a safeguarding delegate.

Since 2011, the General Government has carried out several actions to promote institutional policies that include fundamental principles and norms for the protection of children. In addition to the role of FMSI at the United Nations, two seminars were held at the General House for leaders of the entire Institute: ‘Safeguarding Children and Young People’ (2012) and ‘Keeping Children Safe: Raising Awareness, Creating a Safe Environment’ (2016).

The statement to the survivors and victims of abuse from the General Chapter at the last General Chapter in 2017 was an important step in this process. This statement, underscores that “abuse is the very antithesis of our Marist values, and undermines the very purpose of our Institute. Any abuse of children is a betrayal of the noble ideals of our founder, St Marcellin Champagnat.”

Even considering the achievements that have already been made, the Institute believes it is necessary to continue to progress to the point where this awareness reaches every corner of the Marist world, where adults have the means needed to prevent and protect children from any kind of abuse and where effective action and procedures are in place regarding the dignity of children.

To further the formation of brothers and lay people involved in the Marist mission, the Institute, through FMSI, is promoting the E-Learning formation offered by the Centre for Child Protection of the Gregorian University. Educators from Europe are already attending the programme, offered through the University of Alcalá de Henares. Starting next October, the Pontifical Catholic University of Paraná will offer the same course to Brazilian educators. Soon, other Marist institutions in Peru, Mexico, Chile and Argentina will conclude the agreement with the Pontifical Gregorian University and will also be able to train other people involved with the education of children and young people, becoming promoters of the defence of their rights.