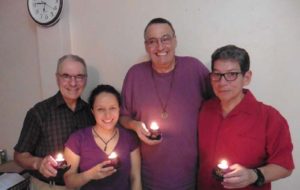 The district of Asia is receiving five new missionaries – four brothers and a laywoman – from Cameroon, Venezuela, Bolivia, Canada and the United States.

The five Marists had been part of the first group of nineteen brothers and lay people that received formation in May and June to prepare themselves as new members of the LaValla200> International Communities for a New Beginning Project.

Their destination countries are the Philippines, Sri Lanka, Cambodia and another country.

The LaValla200> missionaries have started to arrive to their new communities, which superior general Brother Emili Turú assigned them to on June 28.

The other 15 will be going to Amazonia (Brazil), East Harlem (United States), Sicily (Italy), Rome (Italy) and Mount Druitt in Sydney (Australia).

The missionaries moving to Asia belong to the provinces of Santa Maria de los Andes, United States, Canada and Norandina, as well as to the West Africa District.