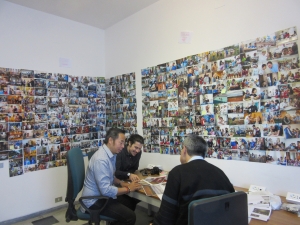 As part of this year’s bicentenary celebration, the Institute is launching a book at the General Chapter in September with photographs of Brothers and lay Marists around the world on mission.

After travelling to 20 countries, Australian visual storyteller Conor Ashleigh was able to craft over 10,000 photographs of Brothers and laity working in places such as a prison in Malawi and a new postulancy in East Timor.

“Throughout the diversity of the Marist world, there has been a core sense of hospitality that has been profound and it’s been universal despite the different languages,” affirmed Conor on Feb. 22.

“I have been genuinely welcomed into Marist communities across the world and that has been why these photos have been able to come about,” he added. “It’s allowed me to just walk into the Brothers’ lives for just one or two days, accompanying them from morning prayer, during meals, and to their mission work in schools and community projects.”

This book, organised by the Brothers Today Secretariat, will include around 500 photos from Brothers and lay people from more than 40 countries.

Brother Tony Leon, the director of the Brothers Today Secretariat, noted that the images reveal “many hugs, many expressions of joy, the easy relationship with brothers and lay people, the sense of tenderness in the way brothers look at a student, the sense of mischief in some of the older brothers.”

“There is a lovely sense that ‘I don’t know this person, but I recognise something about this person as being Marist’,” he stated.

“We didn’t want to create a visual textbook that you consume, we want it to be something more reflective,” continued Br Tony. “It is a book that you look, you contemplate, one image at a time.”

The book aims to describe what brotherhood is in pictures and was inspired by the Vatican’s document “Identity and mission of the religious brother in the Church.”

Before the book is launched, Conor will host a photo exhibition at the General House during the Bicentenary celebration held on the feast of St Marcellin Champagnat on June 6.

The communications office of the General House has released a video, found below, with further insight into the project.