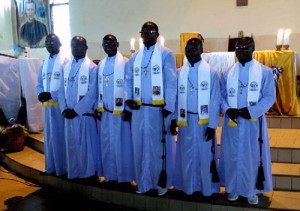 Around 2,000 people attended a Mass at a boarding school in Bafut to celebrate 50 years since the first brothers arrived to Cameroon.

“I believe that by joining the celebration of 50 years and the perpetual professions of the six brothers, the Marist vocation was made visible to many young people, so it was a moment of vocational attraction,” said Superior General Brother Emili Turú, present in the celebration.

“The celebration was done in a very African style, very long but very festive and cheerful with lots of music, dance and lots of involvement with the students who danced,” Superior General told the general house press office on Oct. 22.

Br Emili told how the first Brothers who arrived to Cameroon were from Canada and Great Britain. The Brothers were living in Congo and Nigeria, but were forced to flee to Cameroon in 1965 when violence broke out. 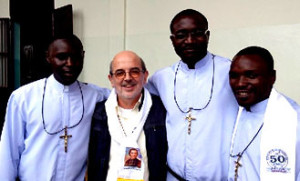 He underscored that now “there are many vocations under way and that it is a nice moment in the history of that country.”

“The 50 years of Marist presence shows a time of maturity, a lot of hope and life,” he added. “My presence was to express communion with the Institute and thank them for their unique contribution to the life of the Marists.”

Saint Albert’s is the biggest of the four schools with Marist teachers in Cameroon and home to 1,020 boys and girls in secondary school, of which all took part in the event.

Two other schools are in Mbengwi, with 600 students, and in Tatum with 300 students and a postulancy, which includes youth from the district of West Africa.

The fourth is the bilingual diocesan boarding school College Notre Dame des Nations in Douala. The Brothers that teach there live in the community of Yassa-Douala, which was created on Sept. 15 this year.

Cameroon is one of the six countries of the district of West Africa – alongside Chad, Ivory Coast, Ghana, Equatorial Guinea and Liberia – and home to the district superior, Brother Francis Lukong, who now lives in Accra, Ghana.

There are 33 Brothers within the District, who were born in the English speaking part of Cameroon, and 17 of them currently live in the country.

The others are either living in other countries of the district or are receiving formation in the Marist International Center in Nairobi, Kenya.