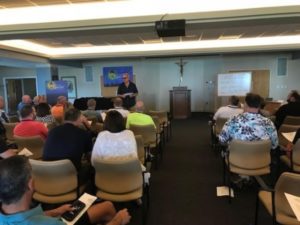 Over 50 Marist educators from around the United States gathered in Long Branch, New Jersey, for a series of workshops of the 2018 Marist Leadership Institute, from July 15 – 18.

Under the theme Ever Marist, making Jesus known and loved, the first speech was offered by Brother David Hall who underscored that Marist schools should be transformative beacons in society.

Workshops were given on changes in student behavior, cultural barriers to education, social and emotional learning, faculty development, the potential of flipped and blended learning and faculty faith formation.

During the event, provincial superior Brother Patrick McNamara offered reflections on the Calls of the General Chapter.

On July 17, the opening presentation was done by Sister Mary Ann Daly (Sisters of Charity), who offered a collaborative exploration into each school’s unique expressions of the Marist mission.

The day’s seminars were on organisational change, faculty development, and social and emotional learning. Brother Al Rivera, co-director of vocations for the USA province, introduced the theme for this coming school year: ‘The year of the youth.’

Larry Tucker offered reflections on being a senior Marist administrator in the USA province and with over 20 years of experience at Marist High School in Chicago, Illinois.

Br David ended the gathering with a closing speech and the administrative team of Christopher Columbus High School in Miami, Florida, led the closing prayer.